In Conversation with their Creator

Wordfreak: *groaning with hands on head* I thought this was going to be a three-way flirt-session…at the very least a Scrabble-session. Not some silly interview.

Worddiva (professional as ever): Was it easy, to write our story?

Creator: It was too easy. I could picture the two of you so clearly that I was afraid that I would never write other couples so well. But I did and I have. Although, you two will always be my favorites…You both are my first.

Wordfreak: *hug and smacking kiss too* My turn. Ever been caught with your pants down?

Wordfreak: What? If it’s my turn to ask a question then I can ask any bloody kind of question I want. So, once again, have you ever been caught with your pants down?

Creator: Yes, once. A very long time ago, thankfully, so I am not quite as red-faced as I used to be back then.

Worddiva: What do you love about the romance genre?

Wordfreak butts in: Sunshine’s talking about romance? Where is that Blue Moon?

Creator: I love that they are character-driven books and that they have happy endings. I dislike books that end in tragedy. Although there are some lovely tragedies I have read and not run straight for the hills after, like Romeo and Juliet.

Wordfreak: Forget it, you don’t care. Sunshine doesn’t care…or so she pretends.

Worddiva: *eyebrows rising* When have I ever wanted to be a “branded” woman?

Wordfreak: So you don’t love that mauve babydoll I got you? And the yellow negligee…

Worddiva: Goodness! Let’s discuss those later, when we’re alone. What inspires you?

Creator: Right now, everything inspires me from taking my dog for a walk in the woods to washing the dishes…or discussions about sleepwear.

Creator: My bed, my room, my home…wherever it happens to be geographically.

Wordfreak: *leery smirk* I like beds too. Really big ones with lots of…ahem…rolling space.

Creator: *shaking head* you are a naughty one, aren’t you? My bed is where I am most productive…OMG! *blush-blush* Okay, that didn’t come out right. I meant that I do most of my writing there. I know…I know…bad for posture but brilliant for the prose.

Worddiva: Why make us meet on the WWW over a game of Scrabble?

Creator: A case of familiarity breeding the imagination, I think. At the time I started writing your story, three people I knew had met and were dating their partners online across continents. All three are now happily married to the same partners, much like the two of you. I am also a Scrabble addict and have been known to play 30 games at a time online.

Creator: Working on your brother and BFF’s story now.

Worddiva: *staring in shock* Goodness! But he is the fuddiest-duddy in all of Dallas…and she’s the party-princess of South Asia…Whatever can they have in common?

Creator: Be patient. You’ll find out. I am creating magic for them too.

Wordfreak: BOO! Hahahahahaha! I told you! I told you on our wedding night that something was cooking between those two. I was right and you were wrong. I was right! And you, Sunshine, have a lot to learn about romance still.

Creator: Same as yours…Live Clean. Live Green. LIVE. And I think that wraps it up nicely. 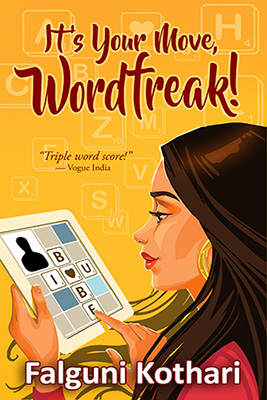